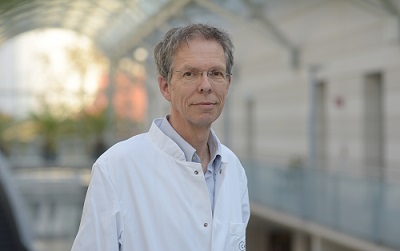 Within our monthly topic of medical care and clinical practice, we talked to Prof Bührer about his work on the study “Sustained inflations and avoiding mechanical ventilation to prevent death or bronchopulmonary dysplasia: a meta-analysis”1. It is about meta-analysis of randomised controlled trials (RCTs) in preterm infants. It showed that delivery room strategies to avoid mechanical ventilation reduced bronchopulmonary dysplasia, whereas sustained inflations had no effect and may even increase mortality.

This paper was published in “European Respiratory Review” in 2018

In this paper, you have analysed various studies concerning BPD. Could you please explain what a meta-analysis is and why this is specifically relevant for that topic?

When a new treatment for a disease emerges, there is only one way to find out if it really works: A randomised controlled trial. This is kind of an experiment that assigns patients by chance to either treatment A (the experimental treatment) or treatment B (the standard treatment). Of course, such an assignment proceeds only after the protocol has been scrutinised by ethical committees and regulatory authorities and after patients or caregivers were given extensive information, and have given their consent. The aim of the trial (also called endpoint) is specified before the trial starts, and a sample size is calculated to determine how many patients have to be recruited to find out which of the two treatments (experimental or standard) is superior. While the percentages of patients who reach the endpoint usually differ in the two treatment arms, these differences may be just the result of chance. Using some mathematical calculations, it is possible to determine if an observed difference is most likely ‘real’ – most likely usually means with a probability of at least 95%. In this case, a difference is called ‘statistically significant’. For trials with few participants, differences must be large to attain statistical significance, while trials with many participants have better prospects to pick up small differences that are statistically significant. Now imagine there are several small trials investigating the same new treatment. In each trial, the percentage of patients reaching the endpoint is larger in treatment arm A than in treatment arm B, but the differences never reach the level of statistical significance. By combining the numbers of these trial into a single large virtual trial, the level of significance may be reached. This method is called meta-analysis. Meta-analyses are a powerful tool when analysing randomized controlled trials with limited number of participants, which is virtually always the case when it comes to newborn infants. Scrutinizing new treatment modalities by meta-analyses is now considered essential before recommendations can be made as to their use in routine clinical practice.

What is the core statement regarding BPD prevention?

It has been suspected that BPD is somehow linked to the transition of the lung being filled with amniotic fluid before birth to being inflated with air after the baby has been born. This transition may be difficult even in term infants, but it can be really hard in very preterm infants. It is the neonatologist’s job in the delivery room to ease this transition and make sure the lungs work properly without getting damaged. There are two opposite strategies to achieve that: One is called ‘early sustained inflation’, aimed at making sure that air which has entered the lungs stays there, in some way defending the territory gained from the water. The other one aims at avoiding endotracheal intubation, as this may be associated with damage to the lung. The endpoint for both strategies has been survival without BPD, i.e. the need for supplemental oxygen 4 weeks prior to due term delivery. In short, the meta-analysis shows that the strategy ‘early sustained inflations’ does not work, while the strategy ’avoiding endotracheal intubation’ helps to increase the rate of very preterm infants who survive without BPD. The effect size, however, is small – only one additional case of BDP is avoided when 30 to 40 infants are treated with this strategy.

How did you come to these results?

A meta-analysis starts with collecting information on randomized controlled trials that have results. We searched a number of data bases, the most important of which is PubMed, agreed on which trial met our inclusion criteria and quality standards, and asked select authors to provide some additional data not contained in the original publications. This was a collaborative effort by two clinician scientists from Berlin, Germany and two clinician scientists from Edmonton, Canada, but the largest share of the work was done by Berlin neonatologist Hendrik Fischer. We found 9 trials investigating the strategy ‘avoiding mechanical ventilation’ and 6 trials investigating ‘early sustained inflations’ (results of a 7th trial became available after completion of the meta-analysis; adding them later did nothing to change any of the conclusions). We then went on to extract all necessary data from the manuscripts and entered them into a software tool provided free of charge by the Cochrane collaboration. This software was used to do most of the calculations. We collected the results, put them into a manuscript and submitted it for peer review.

In the end, which results did you find that are effective methods to prevent BPD?

BPD is a disease that is difficult to prevent. Interventions either do not work at all (such as early sustained inflations) or have only small effects (such as avoiding endotracheal intubations). Other interventions with a statistically significant but overall small effect are intramuscular vitamin A, low-dose systemic hydrocortisone, clarithromycin (in infants colonised with ureaplasma urealyticum) and caffeine (which is given to virtually all infants at risk for BPD anyhow). Some interventions reduce BPD but increase either mortality (such as inhaled steroids) or rates of cerebral palsy (such as dexamethasone) while steroids mixed with surfactant and then instilled directly into the trachea appear to reduce BPD and mortality without long-term negative side effects. I think we have to understand that BPD will be around for many more years, and that we have to humbly accept our very limited possibilities to prevent or treat BPD. However, neonatology often consists of many small actions that do make a difference when applied together in a judicious fashion.

We would like to thank Prof Bührer for taking his time to give this interview.