Viola is born too early, after only 6 months of gestation. She suddenly left the warm and protective environment of her mother’s uterus.
She is not ready for the external environment, but she has courage and strength to spare.
In May 2022, the Italian Society of Neonatology (SIN), chaired by Dr Luigi Orfeo, decided to set up a Task Force with the aim to ensure the maximum chance of survival and quality of life for children like Viola, through the dissemination and the application of the European Standards of Care for Newborn Health (ESCNH), initiated by the European Foundation for the Care of Newborn Infants (EFCNI).

These updated standards embrace a new model of care, aiming not only to treat diseases but also to guarantee the global health of preterm infants and to protect brain development, in collaboration with the family, combining the use of high technology with the power of the relationship.
Italy welcomed the ESCNH with enthusiasm, translating them in a few months, thanks to the synergy between the Italian Society of Neonatology and Vivere Onlus, the national network of organizations of NICU parents.

One of the ambitious objectives of the Task Force is to co-construct criteria for the definition of a “Preemie Friendly Hospital”, i.e., a hospital able to empathize with the newborn family, where  “zero separation” between newborns and their parents is implemented, where NICU is opened 24/7 to parents, where care is based on the best scientific evidence and is multidisciplinary, where a partnership with parents is promoted, skin-to-skin contact and breastfeeding are supported, and as far as possible, where NICU is designed to maximize comfort for newborns, families and staff.
Other important goals of the Task Force are to promote ESCNH diffusion, among professionals and at the institutional level, and to include them in academic and post-academic education.

It has been largely demonstrated that the delicate and rapid development of the newborn’s brain is linked to the experience provided by the maternal uterus, up to 40 weeks. The premature birth causes an abrupt interruption of this “nourishing” experience for the brain, therefore it is essential to recreate a sensory environment favourable to brain development.
The tight and widespread adherence to the ESCNH leads to prevention and reduction of future cognitive, motor, and sensory disorders, school difficulties, incidence of autism, anxiety, depression, and social difficulties that affects more frequently preterm babies, despite improved survival rates. If the care is performed in collaboration with the family, as the ESCNH declare, post-traumatic stress disorder in parents and attachment disorders are less frequent, thus further improving the future health of the infants.

The “newborn, center of the future” is the slogan of the Italian Society of Neonatology and the members of the Task Force will act to make this slogan an everyday reality.

A press release was done in June announcing the new Task Force and more than ten print and online newspaper have spread the news; interviews were done. 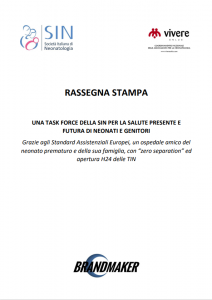 Members of the Task Force: