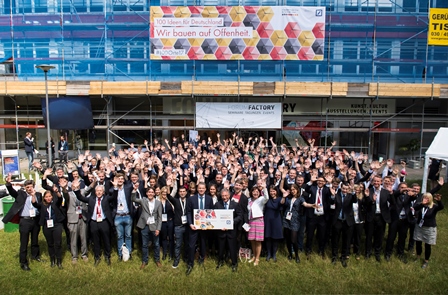 Open your mind: Award by the initiative “Germany – Land of Ideas”

The European Standards of Care for Newborn Health project is one of the awardees in the competition “Landmarks in the Land of Ideas”. The “Germany – Land of Ideas” initiative is a “contest of ideas” which offers creative minds from all over Germany a stage for their innovative projects. The aim of the competition is to provide concrete projects with answers to pressing questions of the future.

It was founded by the German federal government and the Federation of German Industries (BDI) in 2005, with the aim of making Germany visible and identifiable domestically and internationally as a powerful innovator and creative force.

In 2017, the annual theme was „Open your mind and unfold new ideas“. 100 out of over 1000 applicants were chosen as winners in this year. On 26 June 2017 the award ceremony was celebrated at the FORUM Factory in the heart of Berlin.

We hope that the project will benefit from public relations and a growing network of other innovative project teams.

View more (website of Germany – Land of Ideas, in German)